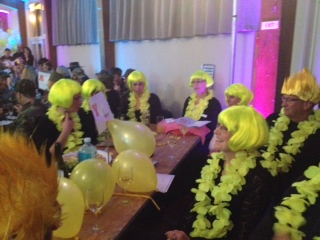 The major fundraiser for St Thomas’s School, Kohimarama, was held recently. Ray White Kohimarama  were the Gold Sponsor for the 9th year.

Peter Best and John Halstead, the owners of the Kohimarama office, say that they are very proud of their long association with this great local school that caters for students from Year 1 to Year 8.St Thomas’s is a high functioning school, nestled within a multicultural, high decile supportive community with very professional and capable staff. The funds raised from this year’s sponsorship will be used toward Environmental Enhancement Projects.

Ray White Kohimarama has donated more than $30,000 to the PTA in sponsorship over the past nine years and this has helped to raise over $250,000 for special school projects.

The event this year was a Quiz Night and auction, with the theme “Alphabet Soup”. There were 26 tables of 10 people (parents and friends of the school) and each group drew a letter of the alphabet that they then used as the basis of the theme for their table. The creativity was amazing.

The Ray White Kohimarama team drew the letter “Y , and with the recent launch of the “Ray White Know How” campaign decided on a spot yellow theme that included yellow wigs and yellow lei’s. Neil Newman, the Ray white, Kohimarama auctioneer was guest auctioneer for the evening and did a sterling job extracting the last dollar from the enthusiastic attendees.

Colette Bates of The Ray White Kohimarama marketing team did a fantastic job in producing the invitations, order of events, office profile brochure and signage for the event. Thank you to Bill at ABC Photosigns for donating the signage.

Peter Best and John Halstead said the evening was another fantastic success, and great creativity was shown by the various tables with their costumes. The “O” table dressed as the Ozzy Osbornes won the best turned out award closely followed by the Smurfs. Peter and John said they were delighted with the $35,000 was raised on the night.

Ray White Kohimarama will be involved in other St Thomas’s PTA events through to the end of the year.