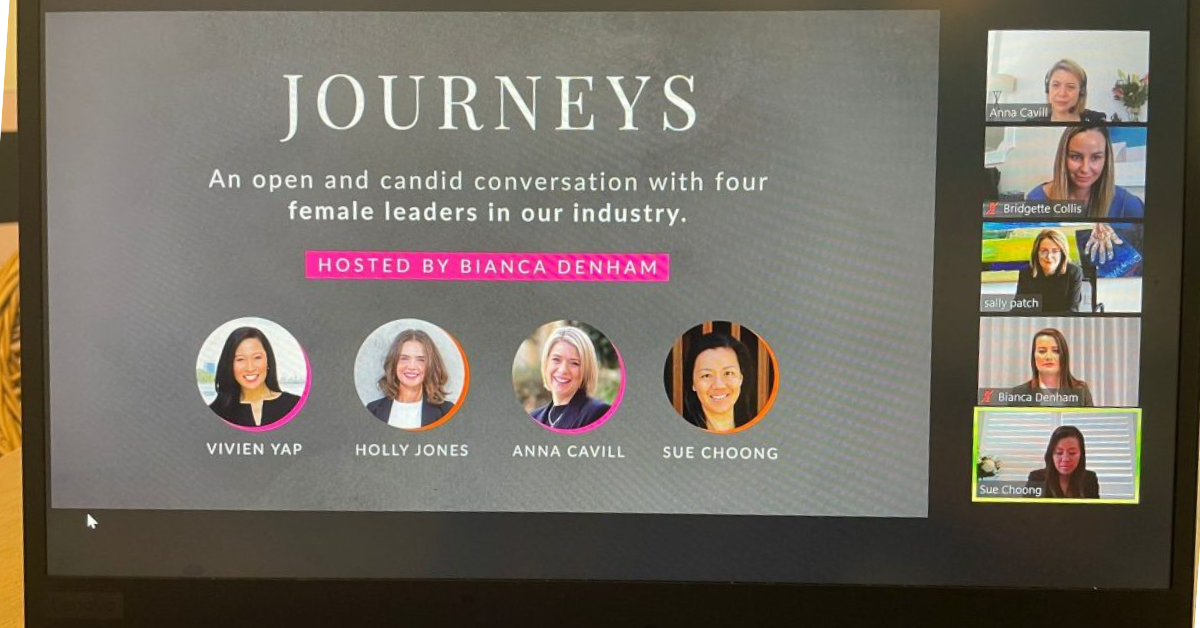 MORE than 400 Ray White members registered for Ray White’s first ‘Journeys’ webinar to recognise and share the stories of the group’s top women.The webinar is the first in a series that will focus on some of the incredible women in real estate and will be an open and candid conversation with female leaders in the industry.Hosted by Ray White South Australia performance coach Bianca Denham, the webinar’s lineup included real estate heavy hitters Vivien Yap from Ray White Dalkeith | Claremont, New Zealand agent Holly Jones  of Ray White New Brighton, Ray White Upper North Shore’s Anna Cavill and Sue Choong who leads a growing property management department at Ray White Kellyville.Ms Denham opened the webinar by introducing the speakers and said while many may already know their stories, today is about taking a closer look at their journey to success.“Some of you will have heard the stories of our guest speakers, part of their stories or all of them during their pathway to success,” Ms Denham said.“But today we’re really going to be focusing on these four women’s journeys into real estate and since they’ve been working in the industry, what challenges they’ve had to face and how they’ve overcome them.”

Ray White Kellyville business owner Sue Choong (pictured above) kicked off the session with her story which began with a double degree in business and law, despite her dream of becoming a vet. She tried out almost every role possible in real estate and found her niche in property management while still throwing her hat in the sales ring every now and then.“I enjoyed looking at building a business and I think that was what really excited me. The fact that I could step into something and I saw how well my father did in the industry as well,” Ms Choong said.However, six years ago Ms Choong decided to do a hard reset on her life and sold two of her three real estate businesses after a major life change.“It was a really challenging time that I went through and I thought I need to spend that little bit of time for myself and my kids,” Ms Choong said.“I thought long and hard about what I needed to do next to keep going and stabilize. It was a bit of a hard reset and I sold two offices and kept one. It’s been a good choice and I don’t regret anything.“It’s really allowed me to refocus back on everything and continue on with the journey and build on property management which actually gave me more flexibility.”

Real estate royalty Vivien Yap (pictured above) was recently recognised as Australia’s top Ray White principal for 2020/2021 but if it wasn’t for her choice to leave pharmacy, it may never have become a reality. Ms Yap said it all started when a friend gave her a guaranteed listing and she figured she had nothing to lose despite some negative comments from friends and family.“They all asked ‘why would you do this?’ and for me, I wanted to prove them wrong because for someone who is a pharmacist and had been in the industry for 20 odd years, I do believe that we can change the perception of how the client sees us,” Ms Yap said.“It was almost like a challenge when they said ‘you can’t do this’. I said yes I can, I can definitely do this and it just became a little challenge for me.“I didn’t really have a firm structured process at the time, I just went with the flow, listened to everybody and learned constantly. I wasn’t afraid to ask and I was just myself and I think people liked me for that and that’s how I found opportunities.”

Meanwhile, Anna Cavill (pictured above), Chairman’s Elite agent from Ray White Upper North Shore first found real estate while flipping houses with her husband and working in a part-time administration role. After being denied a $5 pay rise, she considered real estate and said she remembers thinking she wanted something where there was no limit to what she could achieve.“I wanted something where I could be rewarded the harder I worked and my husband encouraged me to talk to David Walker, the Ray White Upper North Shore principal, who we met while selling a couple of our properties,” Ms Cavill said.“I sat down with him to ask him how to get into real estate because I thought I was too old. I was in my 40s at the time and thought, no one is going to want to hire me and I have no idea how to do this, but luckily  he was opening another office so I asked him for a job.“And the interesting fact I’m told is that in our network, the segment of career starts that have the fastest uptake to success and viability is actually women in their 40s.”

For Ray White New Brighton agent Holly Jones (pictured above), real estate was also not her first choice. The New Zealand agent, who last year won the title of number one international agent (number of sales), originally wanted to go into marketing but ultimately realised it wasn’t the right choice for her.“I actually tried really hard to get into marketing and I couldn’t do the job,” Ms Jones said.“I think just because I had the experience through my parents real estate business, that’s how I kind of fell into the role but initially it wasn’t a thing.”Ray White Group Chairman Brian White closed the webinar and said what a joy and privilege it had been to listen to each story.“You have no idea just how proud I am of you all,” Mr White said.“My father was so proud when he said, Brian, I was the first real estate agent in Queensland who employed a female.“All I can say is what a wonderful initiative, I know it has a fabulous future.”