Iconic Raglan Hotel Up for Tender 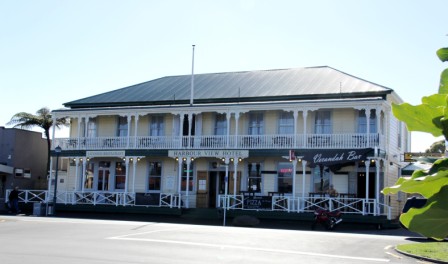 Kashka Tunstall – a favourite piece of Raglan history has been put on the market through exclusive tender agent Dave Hanna at Ray White Raglan. The well-known Raglan Harbour View Hotel, which sits on the beach town’s main drag and has a rateable value of $4 million, is up for tender. Owners Kerry and Jeff Holloway have been the proprietors of the freehold hotel since 2001.

The 19th century villa has long been a part of the town’s story the Harbour View Hotel has existed in some form in Raglan’s main centre for 147 years, serving locals and visitors alike. The current building is the third incarnation of the hotel the original was built on the same site in Bow St by notable Raglan entrepreneur George Moon in 1866. The seaside town’s isolation at the time and dependence on shipping forced visitors to seek accommodation for the night at one of Raglan’s two hotels.

Moon saw the market to open his own hotel, and the business flourished. Two fires, the first in 1901 and the second in 1904, and two rebuilds later, the current iteration was completed in 1905. The hotel operates a restaurant and three bars, one of which is a sports bar with TAB and gaming machines, and another an open air garden bar.

The original accommodation still exists too. There are nine rooms available for rent, and the hotel can sleep up to 28 guests at any one time. It was registered as having a category two historical rating with the New Zealand Historic Places Trust in 2009.

There is a protection order from the Trust in place on the main building and its exterior, but it excludes recent developments. The two-storey building has a floor area of 1110 square metres and a land area of 1708sqm. Dave Hanna, of Ray White Raglan, is marketing the property. He said the hotel’s patronage was still strong and the owners had kept up the maintenance on the building. They had also recently renovated the lower-floor verandah decking and the garden bar at the building’s rear. “It’s a local business in town and probably a key business.

It employs a lot of staff so I’d say it is an essential business,” he said. “It’s probably the iconic building in town, the one people notice when they come in, it’s the one photographed the most and it does have a big history. “I think its a great business for a younger couple.”

He said the Holloways had enjoyed owning and operating the hotel but they were approaching retiring age and were looking for somebody else to take over. “They’ve got a plan to move on and we’ve recently worked on some other property.” The couple also have an interest in a Katikati hotel, The Talisman.