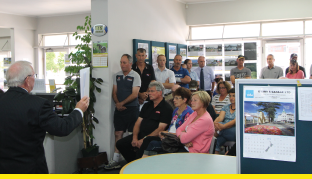 With an opening bid of $1 Million dollars in the Ray White Tokoroa Auction Rooms on Thursday 13 February, there were more than a few surprised faces, and disappointed buyers, in the room.

The 20.2494 hectare block on Old Taupo Road was certainly a rare find in today’s market. – Just five minutes from the town centre, easy contour, well fenced and watered, and currently grazing dairy replacements this easy to run block would lend itself to maize or silage production. Featuring a large 6 bay half round barn, plus large hay shed and decommissioned cow shed, the property comes complete with an executive three bedroom home ( featuring modern kitchen, spacious lounge, the master bedroom has ensuite and walk in wardrobe).

Ray White Tokoroa Rural Sales Consultant, John Williams attributes the interest in the property to the not only to the proximity of the land to town, and the fertile, mainly flat contours of the land, but also to the manageable size of the land which made it “useful” and “appeal to a range of farmers”.

Identifying early on that a buyer may in fact come from an owner of a neighbouring property John Williams wanted to ensure he sought the maximum value for his vendors. A four week auction campaign was undertaken with weekly open days. Adverts in the Straight Furrow captured a wider pool of interest – and in the end 880 hits on trade me and 44 interested parties were recorded with 14 registered bidders on auction day.

In an area where agreements are often made privately, and early discussions with registered parties put the potential sales figure at around the $850,000 – $950,000 mark, the vendors still hoped to achieve over a million dollars for their property. An opening bid of $1 million stopped a lot of bidders in their tracks – but the price rose steadily to reach $1,270,000.00 – well above Vendor expectations, and just proving that although you may know the source of your probable buyer, to achieve the best possible price in the marketplace you need to create the competition, desire, and let the market determine a fair price.

The property sale set a new record for the Ray White Tokoroa team – where similar properties in the area average around the $35,000 per hectare – this property sold for well over $60,000 per hectare. “I think this really highlights the importance of listing with a licensed real estate salesperson and undertaking a professional marketing campaign to ensure you are not potentially capping your returns.” says Ray White Tokoroa Licensee Dave Lamberton.